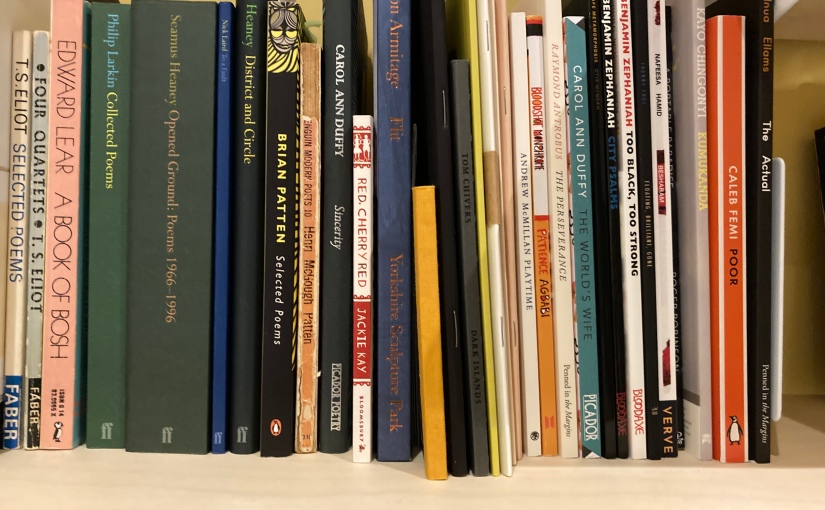 I love the thought of a literally genre telling the story of a time. Like American short stories… that while those writers each sweated over their ‘Great American Novel’, many contributed (admittedly often for monetary reasons) to the rich patchwork of American short stories, snapshots that each mirrored the disjointed nature of such a vast country in a way that a novel never would.

For me, 21st century British poetry is doing something very similar. It is the perfect capture of a moment – of a society pulled to diametric extremes, burnt by past hurt, fighting for change, looking and listening, and carrying a self awareness more than ever before. In a way that other literary forms don’t (or can’t?), poetry has always seemed to ‘hold’ these moments – from painful observations to explosions of joy – and more so than ever, it is a form we need, to tell the stories of our time.

I love poetry. Like, I really love poetry. But weirdly (this is bad, and I honestly can’t tell you why it’s happened) up to this year, I’d spent the first 9 years of my teaching career not really sharing this with students through the curriculum: while I was devouring poet after poet at home, I was teaching AQA’s power and conflict anthology, some very narrow and prescriptive a-level collections (no offence to Robert Frost and John Milton) and then a pretty staid set of ‘appropriate’ poems for unseen. I mean, I’m not going to lie, it was lighting no fires for me or the students.

So when we were locked down last summer, without access to the school library, and with my bookshelf right next to me, I suddenly started planning from what I love.

We talk a lot in our English team about the need for the range of texts on our curriculum to offer both windows and mirrors for students: a window into another world and a mirror into our own. (Aside 1: check out this brilliant talk from Bennie Kara; she calls for curricula that create “ways of seeing and being seen” and calls us to “allow children to sit, and feast on their life” through texts.)

It feels like the array of poetry we’ve explored this year has started to do just this. Across Y9, 10, 11 and 12 we’ve revelled in poetry across the year – it’s probably been the dominant literary form studied in all groups in this academic year. (Aside 2: just as a point of interest, the impact of this on student analysis has been UNREAL – but that’s for another blog).

And it seems to have brought text and student closer than I’ve ever seen before. We shared in heartbreak and strength with Warda Yassin; we became mum’s house philosophers with Otis Mensah; we listened and unlistened with Raymond Antrobus; we stared into eyes of ice with Kae Tempest (and sat in humbled silence for a good 5 minutes after); we asked “what the fuck?” with Inua Ellams; we got locked in a vicious circle with Patience Agbabi; we found independence with Nafeesa Hamid; we saw societal injustice with Caleb Femi; we came of age with Kayo Chingonyi; we explored the realities of our own city with Theresa Lola and Selina Nwulu; we loved and lost and loved again with Adrian Henri, Roger McGough and Brian Pattern; we wept under the hand dryers with Andrew McMillan; we concealed our personal paradise with Roger Robinson.

We’ve listened, watched, read, created, recreated and re-re created. In both my y9 and y10 class, students have brought forward texts that they want to study as poetry, and we’ve organically co-planned and delivered. Poetry has been window, mirror, canvas and soundtrack to the classroom (physical and virtual) of this year. And we’ve all been better off for it.